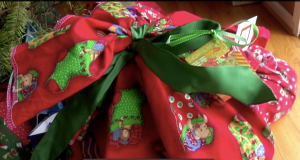 Like it or not, the holidays are soon to be upon us, and like it or not, people are going to give gifts. I know there are some who have successfully removed themselves from decorating their homes with frivolous festive trimmings and giving “things” to their loved ones, but I’m guessing that there are many many others who want to give something; it’s just that they’re tired of the same old crap that gets used for a few months and then tossed.

Our regional government is actually running a campaign this year encouraging people to “Make Memories, Not Garbage”, meaning giving gifts of experiences or material goods that are good quality and meaningful (if you go to their site and scroll down, there are some great gift ideas and ecards).  So, in that spirit of giving, here’s my two cents on low impact gift options.

Yes, if you’re wondering, we have actually given a compost bin as a Christmas gift before.

As an additional note, we’ve found that if you’re giving experiences, it’s best to actually sign them up to lock in a date rather than just give a gift card that could well be forgotten. What are some other low impact gifts you’ve given or received?

Yes, it’s that time of year. My mystery volunteer squash that threatened to overtake the garden have been harvested. The raised beds are looking a little bare, save for a few remaining carrots and beets, a scrawny row of last minute radishes, and the over-producing kale and swiss chard (Grant was done with kale back in June).

The wet weather has blown in. In short, it’s soup time.

My friend Keith called and insisted we go hunting for wild mushrooms. Dreaming of mushroom soup, I grabbed a few containers and we headed out to harvest a local and zero waste meal. Turns out that the mushroom patch wasn’t, as I’d expected, in the forest. It was right downtown. On the edge of a large grassy median in the heart of Yaletown (which, if you’re not from Vancouver, is a pretty fancy pants area).

And that is how I ended up in my gumboots harvesting mushrooms on a median in downtown Vancouver at rush hour as streams of business people walked by. (Never one to draw attention to myself in a public place, I found it a tad embarrassing). I was a little worried about the toxic traffic fumes impregnating the mushrooms, but Keith insisted he’d done this before.