A Sad Day for Breakfast Choices 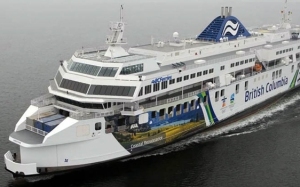 I ride the BC Ferries quite often.  Grant’s family lives on the island, and my family has a cabin over there. Inevitably, Grant and I are too disorganized to pack some food, and we end up eating on the ferry.  It’s actually not so bad.  I appreciate the fact that you can get breakfast on a real plate and eat it with real cutlery. They also serve a pretty mean burger and clam chowder.

But here’s the thing that gets me. Despite the “real plate” options, there is a ton of packaging. The cooler is stocked with a lot of pre-packaged food – salads in clamshells, cheesecake with a plastic ramekin of berry sauce, plastic wrapped sandwiches. You have to be vigilant and strategic to avoid waste.

For example, by the beverages, the stack of paper cups is prominently displayed while the ceramic mugs are tucked to the side.  I’d estimate one in 30 people actually use a reusable mug.  But why?  It’s not like anyone’s going anywhere.  You can’t wander off the ship with your mug; we’re in the middle of the ocean. Why even have a disposable option?

Don’t get me wrong, BC Ferries is doing a lot of good things.  They compost all their kitchen scraps and have paper and bottle recycling prominently displayed.  These things make a big difference, but this morning I was truly disappointed with my breakfast choices.  Today was the day I discovered that all the muffins and scones and baked good that used to be served in baskets are now prepackaged in plastic.

Obviously baked goods were out, and I only had $5 (not enough for eggs), so as I stood in the cafeteria line, I debated between plain oatmeal (the sugar and milk were in plastic cups) and dry toast (same thing with the jam and peanut butter). I chose the former and took some milk from the bulk coffee dispenser, ending up with a decent (if slightly flavourless) breakfast.

Then I stopped by the chief steward’s office to see what was up with the excessive plastic wrap.

It seems that recently (back when the goodies came in baskets) people suddenly got all caught up with the H1N1 virus and stopped buying the unpackaged baked goods. More than that, they were actually taking time to complain that things weren’t packaged. The staff got constant complaints from people reporting that other people were breathing on the scones and coughing on the muffins. No one would buy them.  So, the ferries started wrapping everything in plastic, and, lo and behold, people bought them again.

So what’s going on?  Are we as a population over-reacting, or am I personally just way too lax about possible contamination?  Who are these people lobbying to get more plastic wrap on 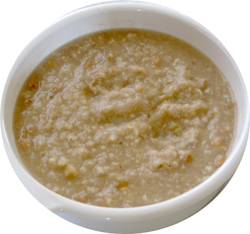 their food?  I have never seen anyone sneeze on anything in a bc ferries display case, but when I voiced my excessive plastic concerns, I was told straight up that I was in the minority.

It got me thinking that maybe those of us who want things package-free ought to speak up more often instead of just quietly making choices and sitting in the corner, eating our plain oatmeal.

6 responses to “A Sad Day for Breakfast Choices”