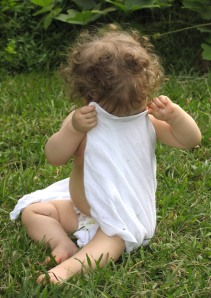 Ok, this is it, I’m a declaring to the world that when I have kids, they will be using cloth diapers the majority of the time.  And you can hold me to it.

What else in the western world creates such volumes of consumer level garbage?  What else makes your garbage smell that fricking bad? Except disposable diapers.

Not that I haven’t been aware of this for awhile, but last weekend, I had occasion to have a few disposable diapers left in my garbage bin, and let me tell you, if I had a garbage bin that smelled like that during the garbage strike, you betcha that I’d be pretty irate.  I’m starting to sympathize with those parents who resorted to dumping their trash in public parks just to get it off their property. . . .

But the truth is (and I don’t want to rant too much, because I know that I can’t possibly relate to the fatigue a new parent undergoes -Grant and I have both commented that a single afternoon is possibly the most exhausting activity known to man) I strongly believe that babies don’t have to equal garbage.

But the very fact that we don’t have kids is what commonly gets put to us in retaliation of our Clean Bin Project.  “Well, you don’t have kids,” people say, “so it’s easier for you”. “You couldn’t do the project with kids”

Part of this is very true.  We don’t have kids.  And that is why we are in no position to tell anyone who does have children that they could produce less garbage.  And that is why, dear readers, I’m about to point you to some amazing waste-free families that do have kids, and you can take their word for it.

1. My Zero Waste.  Little Miss Green is all of 8, and is one of the most environmentally conscious kids I’ve ever seen.

2. No Impact Man. Colin Beavan, his wife, and his then 2-year-old daughter Isabella lived for a full year producing next to zero garbage, eating local, using no gasoline powered vehicles, forgoing elevators, and doing pretty much every other eco-friendly thing you can think of.

3. Say No to Trash.  This couple started blogging about living waste-free and then got pregnant and decided to continue their lifestyle, baby and all.  They aren’t as focused on zero-waste as they used to be, but I guarantee they still produce less landfill than most of us.

4. Greeen Sheeep. She’s a step mom who has the kids part time, but that makes it even more interesting as they go between a “regular” consumeristic household and one that is striving to be greener

5. Family on a Bike. Ok, these people have nothing to do with zero waste, but they do go on extended bicycle tours (I’m talking weeks of camping) with three kids (count em, 3) in tow via trailers and tandem bikes.  If nothing else, they prove to me that you can do anything you want with your kids, not in spite of them.

And these are just the ones I read regularly!  Check out the Green Mom’s Carnival for more eco-families.  And for those with kidlets, take heart: you too can reduce the contents of your garbage bin.  I’m rooting for you.

(and if this all sounds too preachy, then you can laugh in my face when I eat my words and end up swaddling my child in plastic diapers and feeding them instant milk shakes and tv dinners.)

Filed under Around the house