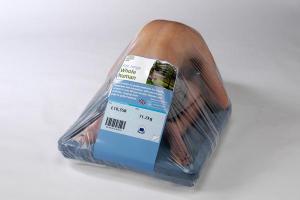 Free Range Human - as far as I can tell, this originally came from http://www.usdesignstudio.co.uk

I think a lot about food.  Well, food and food packaging, but they’re somewhat inseparable aren’t they?  I’ve commented to many people that this year of watching our waste output has translated to a strange and unforeseeable obsession with food.

Because we haven’t been buying ‘things’, all of our waste seems to come from what we eat, and I’ve become hyper-aware of how those products are wrapped, boxed, bundled, and generally presented for human consumption.

Naturally, this has led me a little off the path of landfill waste (environmental health) and into the domain of food quality (human health).  But I might add that there is significant overlap between the two.  What’s good for our bodies is probably good for the planet (and I’m not talking about one of those individually wrapped granola bars that might be labeled organic but has been trucked halfway across the world, I’m talking local, organic, unprocessed, package-free. . .food).

So this week’s film clip is from Food Inc, a movie premiering right now across North America.

What struck me first about this trailer were the beautifully cinematic shots of grocery stores and the abundance of packaging, especially plastic packaging.  This film isn’t really about that.  It’s about thinking about where our food comes from and who is controlling it; it’s also about the choices and responsibility we have as consumers.  I personally think that the sentiment of awareness can be extended both to food and to what it comes wrapped in, but whatever you get out of it, Food Inc looks like it’s going to be an interesting documentary.

Update:  here is the official trailer. (I thought that first one seemed a little like nothing but the opening credits……)

-also they used the same idea we wanted to use for the credits in our movie.  Damn it all.