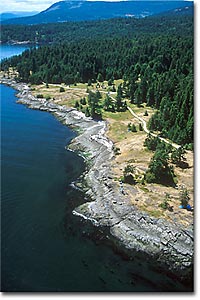 I have been neglecting the Clean Bin Blog the past couple weeks, but lots of exciting things have been happening.

I met two inspiring entrepreneurs -one who helps you cut down on packaging waste, and one who reuses wasted packaging into functional products.  I’ll profile them here soon.

We were feverishly working on an extended trailer of the film that we can show at this week’s ECOnomics conference (we figure the more film we show, the less we have to talk).

But most importantly, Vancouver is now two weeks into summer farmers market season which means that finding zero waste food just got a whole lot easier.

The trout lake market already has full heads of lettuce, tomatoes, cucumber, rhubarb, and a variety of other greens in addition to the usual suspects of dried fruits, baked goods, eggs and preserves.  Plus, they have a new location close to downtown on wed evenings which is awesome for commuters/last minute shoppers like me.

Grant and I spent the weekend cycling about on Saltspring island and managed to hit up the farmers market there too.    The highlight was definitely the asparagus, but we also found cheese straight off the wheel (no plastic wrap in sight) which is pretty rare.

Saltspring is a “back to the earth” kind of place, so I was a little surprised when a woman at the local cafe told me that there are no recycling facilities for businesses on the island.  They don’t even recycle the basics like cardboard!  Luckily bottles and cans have a deposit, so they get saved from the landfill, but I fully expected a place like this to have a compost system and all the recycling sorted out (no pun intended).

Every year I visit another island in the area where the islanders are ubber-recyclers, maintaining a comprehensive recycling center and free store (where you can pick up or drop off any assortment of household items and clothing).  Being on an island really drives the need for conservation and the issues with waster and waste management home.  I had just assumed other islands were the same.  . .

Luckily there was a happy story to balance things out a bit.  We met a local guy cleaning up the beach.  He has lived on Saltspring for 17 years and literally walks the beach every day, picking up styrofoam, bits of glass, plastic flotsam, and whatever else has washed up.  When we met him, he had a bag nearly full of bits and bobs.  Of course, it would be better if these items didn’t end up in the the ocean in the first place, but it was great to see someone taking initiative on a small scale to make a difference.

Filed under food, no waste on the road

One response to “Day 329: Farmers Markets, Saltspring, and General Busyness”