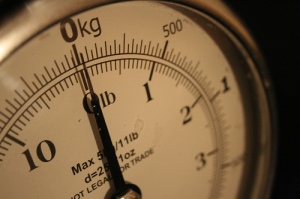 I just found this post (or post title actually since I never actually wrote anything beyond the first line) in the depths of my blog files.

It’s entitled “Day 68: Two Month Weigh In”.  I find that hilarious because, if you’ve been following this blog at all, you’ll realize that I have never, not even once done a weigh in with our trash.

You can see I had lofty hopes.  Well, not too lofty as I had obviously elected to weigh in every month instead of every week like some ubber-organized people, but still, much more lofty than what was actually achievable.

I long for a lovely graph of waste like I find on the sidebar of MyZeroWaste, but alas,that would require me to be organized on a weekly basis.

We didn’t even have the foresight to measure our garbage production before the project, so we don’t have a proper baseline in this already extremely unscientific experiment.

We have had quite a few discussions in our house about how we should be tracking the waste we are generating, but none of them have led to much action.  Should it be volume or weight or number of pieces?

So far we’ve been taking the curbside recycling out every couple weeks and saving everything else on our porch for the miraculous day when we decide to measure it and report on our progress.  Some of it is divided into months, some not, but we do have it.

Filed under Around the house