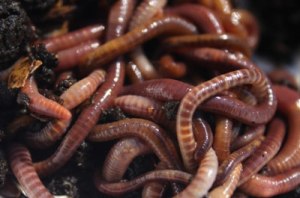 As I have mentioned before, we have a compost.   Just the plain, out-in-the-back- garden variety.  We don’t do much to it besides throw veggies in and cover them with the occasional handful of leaves.  It’s really only in the past two years that I have bothered turning it or maintaining it at all.

It’s this lackadaisical approach (and our sufficiently large back yard) that has kept my knowledge of indoor worm composting to a minimum.  I’m talking about those small bins, complete with lid and drip tray that are basically the only option for apartment dwellers.  I have always managed to avoid them by inhabiting homes with at least a small square of grass, and hence, a traditional outdoor compost.

Now, it’s true that my compost has worms in it, but those are wild, free-range worms.  They fend for themselves.  If they don’t like what I’m giving them, they can

They are not the same as the apartment-dwelling red wigglers that have to be maintained in a closed worm composter.  Those worms have to be fed on a responsible schedule – not too much, not too little, bury it in one corner, then the next.  It seems to me that indoor composting worms are more like pets than anything else.

But, if I did live in an apartment, you bet your boots I’d break out the indoor composter.  I think I have a 3 out of 5 chance of success based on the following personal examples:

1- my old roommate: his worms died after the backyard compost proved much easier and they got abandoned in the back yard.

2- my sister: after a brief escaping-across-the-kitchen-floor episode, she has hers happy and under control, but she sometimes has to bicycle her excess veggie trimmings to a friends to avoid an overload.

3- my office: our floor of three companies shares a single composter on the fire escape.  It is chalk-a-block full of coffee grinds and is perpetually very very full.  That said, it is quite handy, and someone does take it home to unload every once in a while, so the worms seem pretty happy.

4- my co-worker: he recently acquired a worm composter high rise!  Yes, imagine three tiers of worms in your very own apartment.  Truth be told, he managed to get them a spot on the common deck in his building, and now he has got the whole apartment involved.  I deem this composter a gold-star success.

5- my other co-worker: he came to work the other day and announced that something had gone dreadfully wrong in his kitchen, and all the worms had crawled through the ventilation holes and committed suicide in the draining tray.

Which just goes to show that some worms are more temperamental than others, and we should probably just not make sweeping judgements about any of them, pets or not.

If you want to see step by step photos of how to worm compost, click here.